David Wilcox AKA DVWLX is a Manchester based music producer dabbling in the bassier sides of the 130bpm spectrum, he’s had a release on the ever-more-popular Black Butter Records (home to Rudimental and My Nu Leng amongst others) and is deservedly making a name for himself. But with great tunes comes increased promotional needs and the need for some photographs to assist that promotion. We have a couple of mutual friends who recommended him my services and so he commissioned me for a promotional photography shoot. I was quite surprised that we had never met before because he’s a safe guy and his tunes are right up my alley. Check this mix he did for 1xtra….

Back to the shoot and we started by having a brew and a chat in my favourite haunt, Eastern Bloc Records. A famous photographer (who’s name evades me) once said something like “only 10% of a portrait shoot is spent taking pictures”. The real art in photographing people is connecting with them and trying to coax them from their shell a little for the camera, which may not be an easy task with someone you have only known for an hour or less! 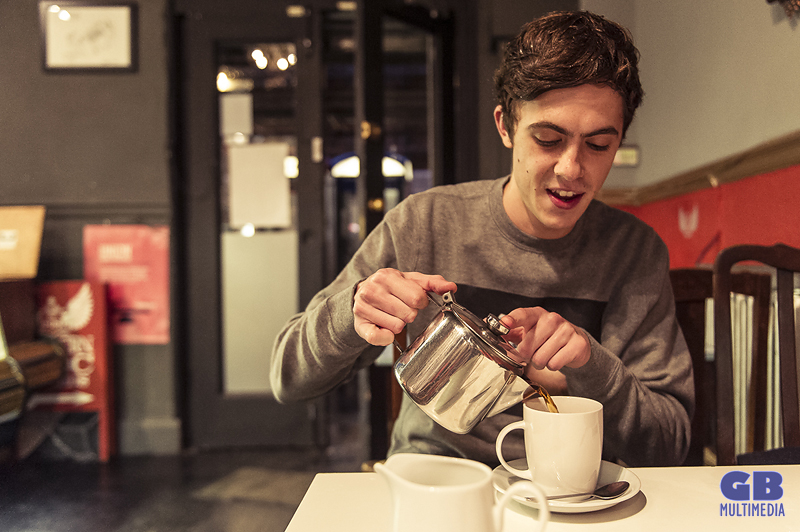 The other reason for the sit-down was to wait for our mutual mate, Mr Al Sonar, to come and let us in to Mint Lounge. Al works for the venue and had previously said we’d be able to get in and use it for the shoot – very nice of him. I’ve shot many a night in there so I knew there was plently of scope for variation inside (not to mention it was tipping it down so shooting outside was off the menu!).

When we got in I set up my lighting equipment and we got to work. I like to try and keep things moving on a shoot so only do a couple of shots with each pose/background, I’d hate for my subject to ever get bored! We got some killer shots – my favourites being the bar and speaker ones – and then head outside as it had stopped raining. After a few more images in Stevenson Square we were wrapped. As it also happened to be DVWLX’s birthday we finished things up with a cocktail and burger in the wicked ‘Lust, Luck, Liquor & Burn’ restaurant.