So Dub Phizix needed some promo shots doing for an interview with DJ Mag. For those who aren’t aware, DJ Mag don’t pay for photos anymore, preferring to blag them through the artist they are reviewing/interviewing in the hope they have some promo shots they can use for free. Luckily George Dub Phizix is a mate so we hooked up for a shoot to get something printworthy. The last promo shots we did together was aaaages ago so he was due an update anyway.

I got to George’s to find that Strategy was tagging along for the ride too. They do a lot of gigs together all over the world so they needed a few pics together too. Here’s a pretty sick mix that Dub Phizix & Chimpo did for Fabric…

My main idea for the magazine shot was to have Dub Phizix sat on a street like a homeless guy, with decks and records around him and a sign saying ‘will make beats for food’. George liked the idea but we tweaked it slightly as neither of us wanted to bring decks onto the streets and he wanted the message to reflect making beats for respect, rather than food, as a commentary on people’s general approach to seeing music as a valueless product (when he’s trying to make a living off it). I liked it. The results are below and I’m pretty happy. 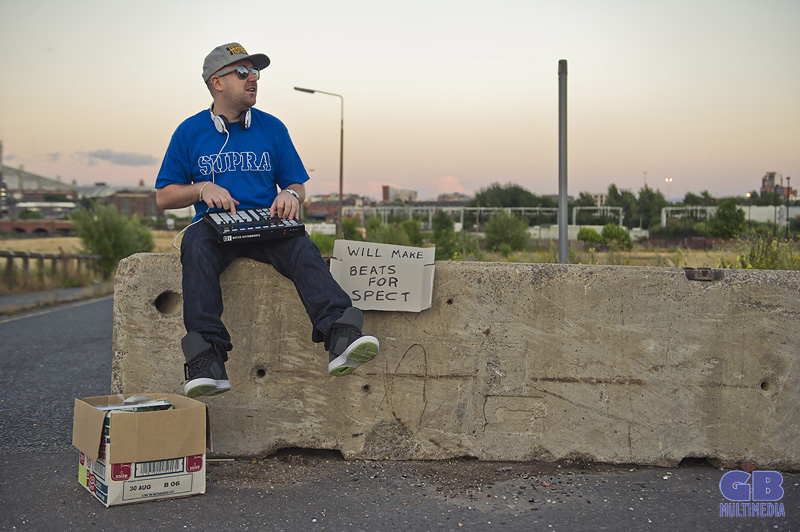 Following that shot we set about getting some ‘Dub Phizix & Strategy’ shots. Neither of the guys were too keen on doing the cliched, moody DJ photo. We’d all rather have a bit of a laugh whilst doing it. So our trip around the city involved flowers, long grass, chips, swearing at the Etihad Stadium (an essential stop) and finally a drop in to the studio with a quick venture on to the roof!

PS The gravy with soy sauce is from a Salford chippy on Oldfield Road – highly recommended!