Shooting a New Kid on the Block It’s always a little bit trickier when you do a photoshoot with somebody who’s never been in front of the camera before. Sometimes the most confident person can look stiff and uncomfortable once you point a lens at them. Of course it’s one of the key jobs of the photographer to recognise and deal with this; to try and bond with your subject in no time at all and get the best results quickly.

I did a shoot of this nature with Gareth Cole recently. Gareth is a new-on-the-scene house DJ who’s quite versatile in his styles. I was feeling this mix from his Soundcloud…

Gareth got in touch for some promo shots as he’s looking to start pushing himself further afield and trying to promote himself for gigs, he felt some decent photos were needed and I think that’s a pretty wise move. Despite the business being (quite obviously) mainly about the music, the internet has led to an prevalence of imagery like never before. Every interview, mix, youtube video, etc. all need imagery to accompany them – an important element which is often overlooked.

So I met up with Gareth in a pub in town called the Gas Lamp – a nice quiet bar near Deansgate with very interesting original décor. We got a drink and had a chat about what he was after, how the music was going, and started to form a plan of action. It was a bit unfortunate that it was a bitterly cold evening therefore a full scale mission around town was off the menu. We did a couple of shots in the Gas Lamp and afterwards stuck to the Spinningfields area which has some interesting backgrounds to use, and we tried to move fast so we didn’t get too cold!

Despite Gareth being new in-front of the camera, after a few pointers we got some great shots. The cold set in after about 20 mins of being outside though so we sought shelter. I was trying to think of another quiet pub nearby that might have enough space to use, and remembered the pool room in the Nag’s Head on Lloyd Street. 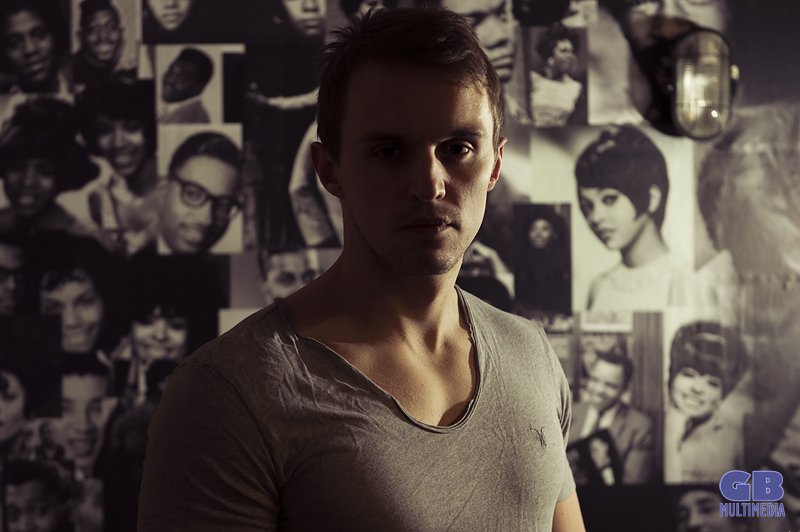 We got in there & luckily the room was deserted upstairs. We warmed up a bit with a game of pool and then got a few final shots – arguably the best of the shoot. Especially this one above using their Motown legends wall as the backdrop.